Why does the pump leak? 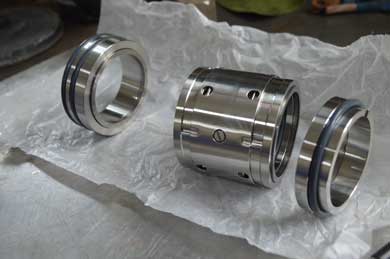 Mechanical seal is the main method of modern pump shaft seal, although it is not easy to achieve complete leakage by using it, but it is possible to achieve a small, completely acceptable leakage amount. But in the operation of the pump is often an embarrassing situation, so what is the reason for the failure of the mechanical seal?

2. The flushing condition of mechanical seal does not meet the design requirements. In the transport of easy crystallization or fine particles of the medium, there must be a certain pressure and a certain flow of washing liquid for washing, or its crystals or particles will accelerate the wear of the seal pair, and affect the automatic compensation of the seal pair wear and leakage. So according to the nature of the transmission medium not only to configure the corresponding flushing pipeline, but also to install monitoring and regulating functions of the instrument and device, to ensure that the pressure and flow of washing liquid meet the design requirements, in order to maintain the normal work of the machine seal, which is often neglected by users.

5, in the use of a single spring mechanical seal, ignore the rotation direction of the spring and the pump rotor rotation direction of the correct combination also occurs from time to time. Or the design did not explain, or assembly negligence, did not do because of the rotation of the rotor mechanical seal of the spring force increased but on the contrary, the results caused by moving ring and static ring friction pair of insufficient pressure and the formation of leakage.

6, bearing serious wear or damage, so that the pump shaft produces serious axial channeling, is also one of the causes of mechanical seal leakage. With the development of science and technology, new sealing forms and materials appear one after another, which will inevitably have a direct impact on the pump sealing technology and promote. Pump products with long life and zero leakage will be popularized and applied in more and more occasions. Oil seal is a self-tightening lip seal, its structure is simple, small size, low cost, easy maintenance, torque resistance is small, can prevent media leakage, also can prevent external dust and other harmful substances invasion, and wear have a certain compensation ability, but not resistant to high pressure, so generally used in low pressure occasions. The oil seal shall be installed on a surface hardened shaft with manufacturing precision of H8 ~ H9 and surface roughness of 1.6 ~ 0.8 m. Seal medium should not contain solid particles and impurities, otherwise it will cause rapid wear of oil seal and shaft and seal failure.

Gasket is the basic element of static seal of centrifugal pump, which has a wide range of application. The selection of gasket is mainly based on the pump conveying medium, temperature, pressure and corrosive factors. When the temperature and pressure is not high, non-metallic sealing gasket is generally used; Medium pressure high temperature, choose non – metal and metal combination gasket. Nonmetallic gaskets are most commonly used in pumps, usually made of paper, rubber, and polytetrafluoroethylene.

When the temperature does not exceed 120℃ and the pressure is below 1.0mpa, the paper with green shell or the gasket made of moulded paper is generally chosen. If the transmission medium for oil, temperature in -30 ~ 110℃ (public number: pump valve home), generally choose good aging resistance butadiene rubber. Fluororubber is more suitable when the conveying medium is -50 ~ 200℃. Because it in addition to oil resistance and heat resistance, mechanical strength is its main characteristics.

In chemical pump, because the medium is corrosive, so generally choose PTFE as gasket material. With the use of more and more fields of the pump, the type of conveying medium is also more and more, so in the choice of gasket material should consult the relevant information or through the experiment to make the right choice. The main reasons for gasket failure are as follows:

1, gasket material internal organization or thickness is not uniform, and the use of cardboard with cracks or wrinkles, so that the gasket itself formed a gap, when the force on the gasket to make the gasket produced by the elastic deformation is not enough to completely fill these gaps, leakage is inevitable

2. The material of gasket is not suitable for the medium delivered. Because the pump delivery by the diversity of the chemical properties of chemical products, and to improve fuel combustion value or change the products of the reaction, the combustion and the increase in fuel into some small amount of additives and make certain properties of fuel oil changes, so choose and medium suitable gasket material is not easy, and therefore often occur as a result of not adapt and make the gasket erosion and a leakage phenomenon is generated.

3. Insufficient pressure acting on the sealing gasket. As a result of the sealing surface there is always micro uneven, sometimes in the sealing surface processing of a number of ring groove, if the seal, it must be sealed gasket to apply enough pressure, make its elastic or plastic deformation to fill these gaps. The compressive force of various gasket materials is usually given in the sample of the gasket manufacturer or in the product specification, and can also be determined by experiment. Gasket failure will result in leakage due to failure to reach the compression force required by the gasket during assembly or reduction of compression force due to loosening of the compression bolt due to vibration during regular operation and loss of original elasticity due to aging deformation of the gasket material. Rubber O – rings are commonly used in pumps. Because its shape is very simple, and thus made easy, low cost, no matter how big is the overall size of the o-rings, the cross section size is very small (only a few millimeters) so light weight, low material consumption, using the method is simple, installation, convenient disassembly, more prominent advantages is o-ring has good sealing ability, using range is very wide. The working pressure of static seal can reach more than 100MPa, and that of dynamic seal can reach 30Mpa. The applicable temperature is -60 ~ 200℃, which can meet the requirements of various media. Therefore, it is widely used in pump design.

O-ring seals although reliable, but if you do not pay attention to the conditions of use, leakage will occur, there are usually the following cases:

2. The nominal size of O-ring seal is too different from the actual installation size, forming the O-ring to work under the condition of reducing the section size after stretching, resulting in insufficient compression deformation and leakage.

3, O sealing ring in the installation, due to the sealing surface of the entrance without smooth chamfer or chamfer and O ring scratches and leakage.

4, O ring material is not suitable for sealing medium and is eroded after failure.

5, O ring after too long use of aging deterioration, elastic reduction and failure, so in the equipment overhaul will generally replace the O ring. The packing full of compressibility and resilience is put into the stuffing box, and the axial compression force of the gland is converted into radial sealing force, so as to play the sealing role. This sealing method is called packing seal, and this packing is called sealing packing. Because the packing seal structure form is simple, the replacement is convenient, the price is low, ADAPTS the rotating speed, the pressure, the medium is broad and obtains the general use in the pump design. When conveying normal temperature medium, packing seal is generally equipped with packing ring, or with the high-pressure cavity of the pump, or external connected with a certain pressure of the liquid medium, can play a cooling, lubrication, sealing or flushing role.

As the packing seal is a contact seal, there must be friction and wear problems. And the size of friction and wear, mainly depends on the packing gland compression force. Great pressure can improve the sealing effect, but it will increase the power consumption and wear of the bushing, otherwise it will produce a large leak. Therefore, the pressing force of the gland should be adjusted according to the leakage amount and the temperature of the leakage medium. If necessary, the filler should be replaced or supplemented. Reasonable leakage of packing seal is generally 10-20ml/min. When the introduction of liquid from the outside, should ensure that the liquid has good chemical stability, neither pollution pump transport medium, and not react with the medium to produce precipitation and solid particles, but also with the filler should have good impregnation and lasting retention, so as to play a good and lasting sealing effect.

In the design of reasonable, well-processed, assembly intact, high speed, maze sealing effect is very good. However, in practical applications, there are a lot of leakage, and the main reasons are analyzed as follows:

1, sealing pair (such as shaft and bearing gland) fit clearance is too large, and the clearance is inversely proportional to the sealing effect. The rough mating surface and obvious spiral tool marks also increase the leakage trend in some cases.

2. There is too much lubricating oil in the bearing room, and the overflow pressure exceeds the sealing resistance.

4. The increase of oil temperature during operation reduces the viscosity and increases the possibility of leakage.

5. The size of the oil return tank or oil return hole is too small, or the blocked liquid cannot return smoothly due to other obstacles, resulting in leakage.

The auxiliary impeller seal structure is simple, reliable, long service life, can achieve no leakage in operation, so in the transport of impurities in the medium of the pump is often used. The good sealing effect of the sub-impeller is conditional, that is, the working pressure is not allowed to exceed the allowed working pressure. If exceeded, it can cause a serious leak. The main reason for the change of working pressure is the pressure change at the pump inlet. Therefore, the pump with the auxiliary impeller seal must make strict provisions on the inlet pressure of the pump, otherwise the seal will fail. Because there are many types of parking seals, it is easy to find after failure, so this article will not be repeated.